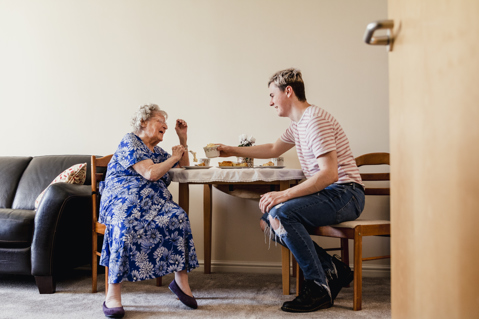 When Alice*, an elderly Ashburton resident, had her fence damaged by a young driver she didn’t know what to do.

Not only did she live on her own but she also suffered from mobility issues. The most upsetting part of the incident was discovering that a memorial plant for her late mother had been destroyed.

A referral was made to Safer Mid Canterbury’s Restorative Justice programme, after eighteen-year-old David*, who had damaged the fence, pleaded guilty to a charge of careless driving. During the initial conference, he heard about the impact of his offending on Alice. Although her fence had already been repaired by a friend, he offered to paint it for her, which she accepted. Afterwards, Alice said the pair had spent a lot of time chatting, even sharing a few laughs and home baking as David worked. As part of his contribution, David also sourced and replaced the memorial plant he had destroyed. Alice said she was impressed by the effort he put into making things right and said he “did a great job”.

The Restorative Justice process provides an opportunity for victims to talk to offenders and say how their lives have been affected by the offenders’ actions. A plan for reparation is also discussed. Following the initial conference, the service coordinator prepares a report for the judge who will be sentencing the offender. The coordinator says it is often valuable for an offender to hear the effect their actions have had on the victim. However, if the offender doesn’t demonstrate remorse or it’s decided that the process won’t benefit the victim, then the conference won’t go ahead. Results from the conference can vary from a verbal or written apology to the victim, through to financial reparation or community work for the offender. Several agencies in Ashburton provide supervised community work for offenders, including Riding for the Disabled, Talbot Security, and the Salvation Army.

Another recent successful outcome from Ashburton’s Restorative Justice process involved young rural couple Toby* and Jane*. The couple had been in a relationship for 12 years and had four tamariki together. But, heavy daily cannabis use and other stressors led to an incident where Toby assaulted Jane, and the pair separated. Following a Restorative Justice conference, Toby began to attend the Stopping Violence programme and the pair also attended couples’ counselling. Both stopped using cannabis and several months later decided to get back together. They now describe their marriage as “stronger than ever” and say that Restorative Justice helped motivate them to change their lives.